7 Crush Worthy Bands That Are Making a Name for Themselves ... 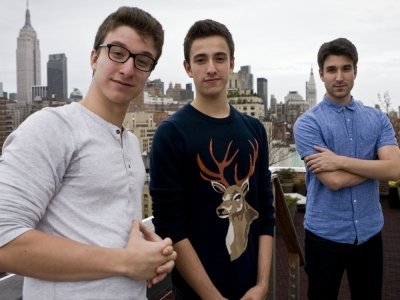 Trust me, 2014 will be full of crush worthy bands! It makes me very excited because I can't wait to hear all the new music that'll be coming out this year! There are a few new bands that have already made it on to my music radar, but I think this year will be the year that they all take over. Check out my pick for seven of the most crush worthy bands that are sure to break out this year. Let me know if you agree or who you think should be added to the list!

Topping my list of crush worthy bands is The Vamps. I mean, look how adorable they all are! They're an English band and after major success in the UK with their debut single, they're now starting to hit the US. They've covered songs on their YouTube channel from One Direction's "Story of My Life" to Hanson's "MMMbop"! My personal favorite is an original song of theirs. It's called "Wild Heart" and it's so catchy!

This band got a lot of buzz in 2013. They were performing with The Wanted and even selling out their own shows. They refer to themselves as "America's Boy Band". I mean, they're not lying! All the members are incredibly talented. I'll admit, I do have a favorite. I'm looking at you, Thomas! However, the band as a whole is incredible.

I've been obsessed with this band for quite some time now. They're massive in the UK and have been getting lots of attention now in the US. Their song, "Pompeii" is one of my favorites and you might've heard it on the radio already! I'm almost positive that in 2014, they'll have a lot more singles on the radio. Their album is perfection.

These Australian cuties have practically turned into "the next big thing" overnight. They started off on YouTube and gained a loyal fan base. They became one of Tumblr's most reblogged bands of 2013. With all the buzz they were getting, the boys landed themselves a spot opening up for massive superstars, One Direction, in Europe and Australia! P.S, they just nabbed MTV's Buzzworthy Fan-Favorite Breakthrough Band of the year. I'm telling you, they'll be making huge headlines this year, so become a fan now!

Just watch this video and you'll fall in love with them! The Boy Band Project is made up of five cuties! This was the first song I heard from them and I was very impressed. Each solo part is amazing. I have high hopes for them for 2014! I think they'll be very successful. Aren't they just super adorable?!

I guess all the breakout bands are coming from the UK this year! I swear that country has SO much hidden talent! Rixton is super swoon-worthy. They make hilarious YouTube covers, and have just released their newest single, "Make Out", which features funny spoofs of pop culture!

Just listening to their song, "I'm Ready" makes me feel happy. It's such a feel-good song! This brother trio is incredibly talented. I mean, now that the Jonas Brothers have officially called it quits (I'm still in mourning), we need a new brother band! I think AJR is perfect to fill that void. Check them out!

There you have it! These 7 crush-worthy bands have been working really hard to make a name for themselves. They've all gotten on the radar and now 2014 is their time to breakout. Who's your favorite? What crush-worthy band do you think should've made the list?