7 Controversial Songs That Are Worth Listening to ... 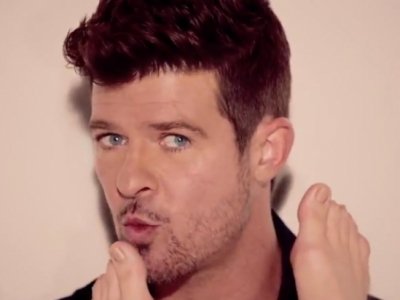 There are some controversial songs that are worth listening to, as well as watching their accompanying video. When it comes to the arts, whether it be film, TV, books or music, we all know that controversy sells. When something is banned, whether it be a book, film or a song, it can ultimately propel the artist to fame and these songs are no exception. No publicity is bad publicity right? And if people are talking about it, the intrigue grows even more, as does the artist's bank balance! So here are some controversial songs that have set tongues wagging in the past and present.

This is one of the most recently released controversial songs and it was probably helped along by Miley's performance on the MTV Awards last year. It has in fact, been touted as the most controversial song of the decade in the UK, being banned from play lists at some University student unions, due to the fact that, in their view, it promotes a worrying attitude to towards sex and consent to it. The song has also reignited the debate about sexually explicit lyrics and music videos here in the UK, and the ways in which young people are being over exposed to risqué music videos. What do you think, a whole lot of fuss about nothing or a legitimate worry?

Now, it's not so much the song that caused controversy but the subsequent music video. The song is based on 15 year old Jeremy Wade Delle, who shot himself in front of his classmates in 1991. I have always been haunted by this song, mainly because of the music video and because of the sad story upon which its based. Unfortunately, it still resonates with many people due to the school shootings in America, even though Jeremy shot only himself and not his classmates. The music video was heavily edited and instead of showing the boy shooting himself, it cut to his classmates covered in blood, misleading people into thinking that the protagonist shot his classmates and defeating the object of the song in which Jeremy "spoke in class today". As a result, Pearl Jam didn't make another music video for six years, stating that the videos were detracting from the music itself.

3 Smack My Bitch up by the Prodigy

Yes I know, this song is both degrading to women and the title seems to condone violence towards them but bear with me. Understandably, this song met with controversy on its release in November 1997. Now, when you give a song a title like this, you're obviously courting publicity. The Prodigy knew exactly what they were doing and I'm sure they reaped the financial benefits! The lyrics are anything but extensive, consisting of two lines only: "Change my pitch up, smack my bitch up". Imaginative. The music video was something of a coup however. It features the protagonist, who we don't see until the end, engaging in violence, excessive drink and drug consumption and general debauchery. Where everyone thought the perpetrator in the music video was a man, it actually turns out to be a woman, therefore subverting traditional stereotypes. A savvy move on the part of this anarchist dance ensemble and something that just got people talking even more!

4 Relax by Frankie Goes to Hollywood

Banned in the UK in 1984 for its sexually explicit lyrics, the controversy surrounding the song propelled it to the number 1 slot in the UK charts and kept it there for four weeks. The story goes that BBC Radio One DJ Mike Read was playing the dance single Relax and whilst doing so, scanned the sleeve and read the lyrics. He is then reported to have lifted the needle, mid-way through broadcast, branding the lyrics obscene and banning the song. Other radio stations swiftly followed suit, but it did nothing to quell listeners' appetites who continued to buy the song in their droves. Interestingly enough, the song didn't cause half as much of a fuss in the US as it did in the UK. Maybe our friends over the pond are a little more open minded?

5 Killing in the Name of by Rage against the Machine

This song is a politically charged one by the American rap metal band and was inspired by the Rodney King incident, in which four white Los Angeles police officers savagely beat the motorist and were subsequently acquitted. The incident also resulted in riots and the song is an angry rant at the system, which they believe allows institutional racism to take place and ignores police brutality. The song is full of expletives but the group certainly get their point across.

6 Ebeneezer Goode by the Shamen

This song by British dance group The Shamen, was released back in 1992 and with its overt reference to recreational drug use chanted in the refrain "Eeezer Goode Eeezer Goode, he's Ebeneezer Goode", it's a mystery how this song ever passed any censorship here in the UK! It also came at a time when illegal raves were happening all over the country and when Ecstasy was the recreational drug of choice.

Appearing on the award winning album of 1984, Purple Rain, this song is about sex, pure and simple. This wasn't actually released as a single but the album was so popular that it didn't escape the controversy carousel. No thinly veiled metaphors and disguised refrains here, the lyrics are so explicit I'm blushing simply typing about it! The story goes like this, the persona meets a "sex fiend" in a hotel lobby, "masturbating with a magazine" and can't believe his eyes when he sees "her many devices"...He doesn't mince his words does our Prince! Clearly courting similar publicity, the never shy Rihanna performed this little ditty on her 2011 Loud tour, legs akimbo of course.

So, these are some songs that caused a bit of a stir on release but that have probably been more successful as a result of it. Which are your favorite and can you think of any others?