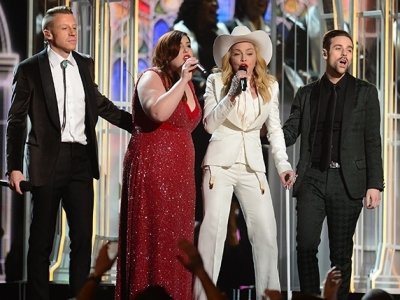 Although this year was, without a doubt, one of the best Grammy’s we’ve had in years, there were still some strange 2014 Grammy performances that left us all wondering what just happened. I was reminded of this while attempting to comprise this list. There were a lot of 2014 Grammy performances, and while some were definitely a little strange, most were insanely awesome. We had reunions, we had collaborations, we watched records break, and overall, it was a great year to watch the Grammy’s.

I absolutely adore Katy Perry. In fact, I’ve seen her in concert. However, this performance wasn’t very memorable to me. It felt more like a VMA performance and less like a Grammy performance. There was too much production going on around her. The Grammy’s are “music’s biggest night,” and most artists tend to focus their performances on the music rather than the production behind it. Because of that, this was one of the few uncomfortable 2014 Grammy performances to me.