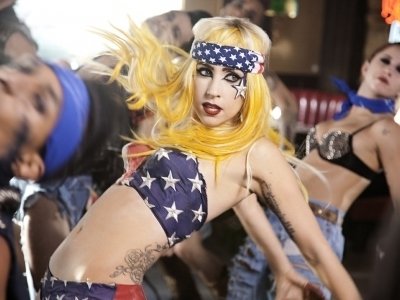 One of the best Lady Gaga music videos is without a doubt her smash-hit, Bad Romance. Bad Romance is the track that made Gaga a household name in the music industry and the video is just as amazing as the song. The plot of the video is that Lady Gaga is in bathhouse where she gets drugged by supermodels and auctioned off to a man. She gets her revenge when she kills her captor in bed. Gaga said that the video shows, “how the entertainment industry can, in a metaphorical way, simulate human trafficking – products being sold, the woman perceived as commodity.” The edgy video was highly acclaimed and remains as iconic as the song itself.

Paparazzi is the first video in a Lady Gaga music video saga. In the video, Gaga is in a fancy seaside mansion with her Swedish boyfriend, played by Alexander Skarsgård. He moves her out to the balcony for a kiss when the paparazzi start taking pictures of the two. Gaga realizes her boyfriend was responsible for the photographs as an attempt at fame for himself and a struggle between Gaga and her boyfriend leads to her falling off of the balcony. Gaga ultimately gets back at him when she poisons his drink. Afterward, Gaga calls the police and informs them she killed her boyfriend, which lands her in the spotlight once again. The video is a statement about how far people will go to achieve fame. This video, along with her VMA performance of the song, showed the world that Lady Gaga is a force to be reckoned with in the pop music industry.

Telephone is the follow up video to Paparazzi. The video takes off right where Paparazzi leaves off – with Gaga in prison. After a dance in the cellblock, Gaga is bailed out by her friend and duet partner, Beyoncé. The two drive off in Quentin Tarantino’s infamous “Pussy Wagon” where, after an exchange of dialogue, the two head off to a diner. There, Gaga and Honey B meet up with Bey’s boyfriend, played by Tyrese Gibson, and he is not very pleasant. So Bey attempts to “pull a Gaga” by poisoning him, but it doesn’t work out as expected. So the murderess herself, Gaga, goes to the kitchen and makes a sandwich that does the trick. Not only do they take care of the “boyfriend problem” they kill off everyone in the diner. The video ends with Gaga and Bey driving off together with police sirens wailing behind them. This video is an ode to Gaga’s love for director Quentin Tarantino. Although the video stirred some controversy for its sexual scenes and violent imagery, all-in-all this is one of Lady Gaga’s best loved and highly-praised music videos.

Marry the Night, directed by Lady Gaga, is an autobiographical story about when Gaga was signed and then dropped from Def Jam Recordings. Gaga showcases her emotions from the moment she got dropped up until she gets signed by her current label, Interscope Records. The video is emotional and personal and includes a long opening monologue (which in my opinion is the best part). Although the video has its fair share of metaphors, it is perhaps Gaga’s most straightforward work to date.

Alejandro is one of Lady Gaga’s raciest music videos. The video has a homoerotic military theme that Gaga described as being, “a celebration and an admiration of gay love – it confesses my envy of the courage and bravery they require to be together.” Lady Gaga is always going above and beyond to show support for her gay fans and this video is a perfect example of that and what makes this video one of her best works.

In the music video for Judas, Lady Gaga plays the part of Mary Magdalene and The Walking Dead star, Norman Reedus, plays the part of Judas. The synopsis is that Mary is with Jesus and tries to protect him from Judas but ultimately gets charmed by the bad boy. After a series of events, both Judas and Jesus keep their lives, but Gaga as Mary Magdalene is stoned to death. The video is aesthetically beautiful and is artistic and spiritual in its own way.

Lady Gaga’s newest music video is already one of her best. This video has so much imagery and nods to past art forms that it is almost impossible to catch them all. Gaga even channels herself from her earlier years as a recording artist. The most recognizable homage in the video is to Sandro Botticelli’s “Birth of Venus.” She channels so many icons in the video, how many can you spot?

These 7 videos sum up Lady Gaga’s larger-than-life artistic vision. Gaga’s music videos are as compelling as the star herself. Each of the videos garnered public attention and even stirred up some controversy. So now that you’ve seen each of these videos, I wanna know, which one is your favorite? Sound off in the comment section!