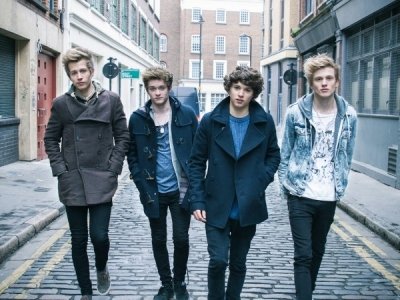 There are so many signs that prove that The Vamps are the next big thing. In case you haven't already heard of them, the band is made up of four British cuties with major talent. They're currently taking the music biz by storm in the UK and there's no doubt that they'll be taking over the US in the very near future. Check out some of the signs that prove The Vamps are the next big thing then, let me know what your favorite thing about them is.

When the boys came over to the US for their first American headlining show, they SOLD OUT tickets on the first day of its sale. That's pretty impressive, right? They performed at the Gramercy Theater in New York and were incredible. They brought out a huge crowd and were sweet enough to thank everyone (on multiple occasions) for d showing their support. I think selling out their first NYC performance is a major sign that The Vamps are the next big thing!

This summer, the boys are joining pop superstar, Austin Mahone, on his tour. They'll be sharing the stage with Austin, Fifth Harmony, and Shawn Mendes. I'm really excited about this lineup because everyone is just SO talented! I think the boys will do great on tour, and the exposure will definitely help them gain an even bigger fan base. Who knows, they might be headlining their own tour come next year.

On their individual Twitter accounts, the boys are all nearing one million followers. They've got such a loyal fan base, and the fans are supportive of everything they do. Their fan base is growing more and more each and day, but the boys still try really hard to interact with their fans on social media.

The boys released their debut album, "Meet The Vamps", in the UK and got an overwhelmingly positive response from fans. They soared up the UK iTunes charts and I'm confident they'll do the same when their album comes out here in the states.

Amazingly, the boys got their following through YouTube covers. They covered (and still do) modern songs like some from One Direction, but then also throw in an oldie like Hanson's "MMM Bop". They're nearing one million subscribers on their YouTube channel and their music video for "Can We Dance", which was co-written by Bruno Mars, has over thirteen million views. I'll let that speak for itself.

Let's be real, it's like the British Invasion all over again and no I am NOT complaining. The UK is full of AMAZING artists and I love it when they start to get recognition over here! Nowadays, if you've got talent and an awesome accent, you're good to go. That's why I think the boys will have no problem becoming mainstream in the U.S!

One sure sign that proves The Vamps are the next big is the most obvious one - their talent. The boys play their own instruments on stage and have an awesome vibe that you just can't help but love.

Well, there you have it! These are just seven out of many sure signs that prove The Vamps will be taking the music industry by storm in no time. If you're already a fan of theirs, what's your favorite thing about them? Are you excited to see them out on the road?