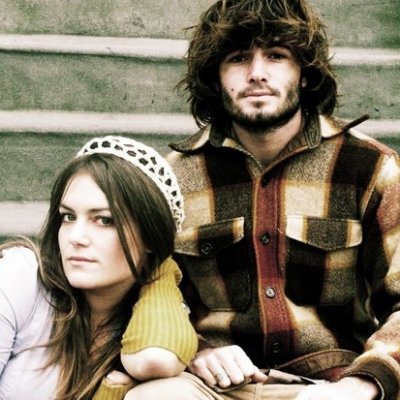 There are so many fantastic reasons to listen to (obsess over) Angus & Julia Stone. They're incredibly talented and are the epitome of true musicianship! I love that their music reflects their life and how they are brave enough to be so honest with their listeners. Personally, I can't get enough of their sounds. Check out some of the reasons why I love Angus & Julia Stone and then let me know why YOU love them!

In case you didn't know, Angus and Julia released a new self-titled album earlier this month! It features 13 tracks (16 on the deluxe version) and they're all as amazing as the next. I am SO excited that the duo finally got in the studio to release new material. I've been waiting for so long! If you haven't heard their album yet, I definitely recommend checking it out. Their new album is just one of the reasons why you should be listening to Angus & Julia Stone.

That's right - Angus & Julia are touring! They're hitting multiple countries and the US leg of their tour kicks off in October. Head on over to their official site, angusandjuliastone.com to find out if they're coming to a city near you! I've already got my tickets to their October show in NYC and I couldn't be more excited. I can't wait to hear them sing some of my favorite songs live!

If for some reason the duo's band name didn't connect all the dots for you, Angus and Julia are brother and sister! I think that's really cool that they have such a close relationship and can work so well together. Did you know that their parents were a folk duo back in the day? Looks like music runs in the family!

I have yet to see them perform live (I will in October - YAY!), but I've watched SO many of their live performances on YouTube. They sound just the same (if not better) than their studio recordings. I love musicians like that - it showcases their raw and genuine talent. Have you ever heard the duo perform live? Give me details!

You can find a bunch of their music videos on YouTube and start binge-watching them! I think they're all kind of weird and quirky, but that's what makes me love them so much. Anyone else think the same?

Angus & Julia Stone are the kind of musicians that only release timeless songs. It's been years since "Big Jet Plane" was released and I'm not kidding when I say I listen to it multiple times a day. I don't think I'll ever get tired of it! The same goes for a lot of their other songs - the lyrics and the melody are definitely what makes a song repeat-worthy. What song of theirs can't you get enough of?

To state the obvious, this folk duo is incredibly talented. I love that they pour their heart and souls into their music. I can't wait to finally see them soon!

Well, there you have it. These are just seven out of many awesome reasons why you should be listening to Angus & Julia Stone! If you're already a fan of theirs, what's your favorite thing about them? Will you be seeing them on tour?