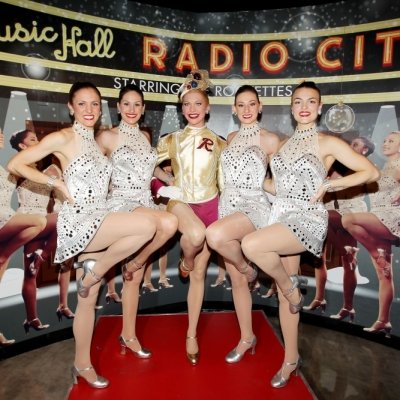 Radio City Music Hall, nicknamed “The Showplace Of a Nation,” is a mesmerizing magical place, whether seen through the eyes of a child or an adult. Come along as we take a tour of the interior, learn a little about the history, and discover interesting facts about the fabulous Rockettes and New York’s famed Radio City Music Hall.

The main entrance is on 6th Avenue, officially called Avenue of the Americas, (but I’ve never heard it called that by a New Yorker), between 50th and 51st streets. Radio City Music Hall is part of the Rockefeller Center complex. There were plans to demolish the building in 1978, when family type films and live stage shows were out of favor, but reprieve in the form of landmark status, saved the music hall.

If you’re a lover of Art Deco, the interior of Radio City Music Hall will be quite a sight for you to behold. Original furnishings from 1932 have been restored to their former luster. There’s seating for 6,000 patrons, with each having an unobstructed view of the proceedings on stage. There’s an incredibly complex “elevator system,” that moves people, animals, props and orchestra. The famous Wurlitzer pipe organ is the largest built organ for a movie theater. The centerpiece of the stage is the rise of the majestic gold curtain before each show.

3 The Films and Performers

Did you know that over 700 movies had their premiere at Radio City Music Hall? A short list includes “King Kong;” “Breakfast At Tiffany’s;” “To Kill A Mockingbird;” “The Lion King” and “Harry Potter and the Prisoner of Azkaban.” In 1979, the venue became home to concerts and special attractions. Entertainers that have performed include Frank Sinatra; Sammy Davis Jr.; Ray Charles; Aretha Franklin; Riverdance and of course, the Rockettes.

The Radio City Rockettes must be between 5’6” and 5’10 ½” in stocking feet. While it might look like they’re just having fun up on that awesome stage, the Rockettes are dancers first, and must be proficient in tap, jazz, ballet and modern dance. You can’t be younger than 18 to audition and each dancer must re-audition for the following year.

5 The Rockettes – Costumes and Makeup

Each girl is required to do her own hair and makeup in accordance to whatever dance routine they are performing. Costume changes are wicked fast, with 78 seconds being the quickest change ever made in the Christmas show. There are eight costume changes. Thanks to a tiny transmitter worn under the arch of their dancing shoes, every tap is audible throughout the entire hall.

The Radio City Christmas Spectacular features new numbers as well as traditional routines performed by the “precision dancers” that make up the Rockettes. The famous kick line performs “eye-high kicks,” and when the Rockettes are in the kick line, they’re not putting their weight on their fellow dancers, but just lightly touching the fabric of the other’s costume. The show runs every night, from early November through December 31st; with between five and six shows per day , and is 90 minutes long without intermission.

There are twice as many dancers as appears on stage at any one time, plus backups to cover sick days or emergencies. The cast splits the number of shows done per night which allows all dancers to get some rest and a day off. Since the '90s, the Rockettes have performed only the Christmas Spectacular, but slated for spring 2015, a new show called “Heart and Lights” will take the stage. If you’re interested in learning more about the audition process for future shows, please see radiocity.com.

If you get to New York when the Rockettes are performing, or someone you like is in concert, do you think you might go see a show ? Have you been to Radio City Music Hall as a youngster and care to share memories?