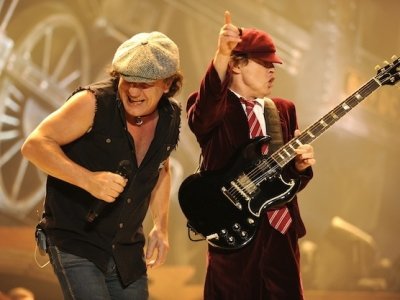 Their lead guitarist, Angus Young, has to be seen to be believed and should serve as motivation as to why you should watch AC/DC live at least once before you die. Most bands rely on the singer to steal the limelight and be the showman. However, the band, known as ‘Acca Dacca’ in Australia, has never been a band that follows trends. Angus can be seen dressed in his trademark school uniform and eliciting energy comfortably capable of powering a small town. The younger sibling of the Young brothers stands still, often sprinting from one side of the stage to the other and intensely leaping to further heighten his gigantic performances. Despite his incredible showmanship, it should not be forgotten that Angus is responsible for some of the finest guitar work in rock history.

The astounding wealth of tracks written by the band are not just AC/DC anthems, they are hard rock treasures. How many bands could get away with slipping the iconic riffery of Back in Black third into their setlist? Every song is met with the chanting of the unforgettable gang-style choruses. You will find it impossible to resist the urge to join in.

There is no limit when it comes to Acca Dacca deciding on the grandeur of the pieces that are a staple part of their live set. The most recent ‘Black Ice’ tour saw the band displaying an almost full-size train engine. Singer Brian Johnson will swing on a large bell for the introduction to ‘Hells Bells,’ before pumping his fist as a giant, inflatable, tattooed women epitomises the cheeky side of the band while they launch into ‘Whole Lotta Rosie.’ And I haven’t even mentioned the firing of cannons and the explosion of fireworks. After all, every AC/DC show starts and ends with a bang. It really is rock ‘n’ pantomime at its finest. You got your ticket yet?

When you go to an AC/DC gig, it is a guarantee that at no point they will slip into the emotional indulgence of a ballad. Unashamedly unpretentious and the greatest exponents of a rock song known to man. If it ain’t broke, why fix it?

So often there are two sides to every glory and this is reflected in the songs that the band plays live. After the tragic death of their talismanic lead singer Bon Scott in 1979, they recruited unsung hero Brian Johnson, who helped the band recover to produce the worldwide acclaimed masterpiece that is Back in Black. The band still plays a wide array of tracks from the Bon Scott era and their live shows embody the resilience that has molded AC/DC into one of the most celebrated bands in the world.

Loud music, passionate fans and the swigging of beer give every AC/DC gig a party-like atmosphere. Every song is greeted with cheers and the mass tapping of feet would not look out of place on the swankiest of nightclub dance floors. Trust me, the hangover the next morning is well worth it.

7. The Audience Can Relate to the Band

Angus has said that one of the keys of AC/DC’s longevity has always been the ability of their audience to relate to them. When I saw them live this vision came across. I didn’t feel like there was a class divide and even on stage the band remained very down to earth. It is refreshing in the golden age of celebrity to be in the presence of a band that does not seek fame or fortune. They just love to rock. Why don’t you join them?

The meticulous planning and efficiency that go into an AC/DC live show are evident in the spellbinding performances that the band has given to their fans for over 40 years. Acca Dacca are living legends, fast approaching the final chapter of what has been a remarkable chapter in rock ‘n’ roll folklore. For those about to rock, I salute you. What other bands do you recommend to go and see live?