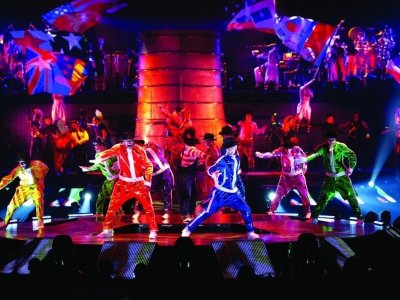 To this day, I'm bummed that I didn't go to one of these shows. I've heard rave reviews on it! Cirque Du Soleil incorporating MJ? That sounds epic. The tour grossed $157,299,100 across more than 200 shows. If the show ever comes around again, I definitely plan on going!

This woman can do wrong. She's not afraid to be herself and she has such killer talent. She puts on a fantastic performance that really engages the crowd! She sold out 111 of 114 shows, bringing out 1.5 million people in attendance. The tour grossed $147,947,543.

It's no surprise that a major name like Bruce Springsteen brought out a huge crowd. He sold out 36 of his 53 shows. His tour grossed $147,608,938, just a little under P!nk's tour. I'm sure his concerts must've been something fantastic to watch. I'm sure the music sounds better than ever!

Rihanna always brings out a huge crowd no matter what she does. Her tour grossed $137,982,530, bringing in a little over 1.5 million people. She sold out 84 of her 87 shows. I regret not going to see her when she was performing in my city! I heard that she did a fantastic job. What else could we expect from her?

Whenever there's something like a "reunion tour", you can expect everyone to attend. The Rolling Stones had 23 shows and sold out all of them. Their tour grossed $126,182,391. Once again, I'm disappointed that I didn't have a chance to see them when they performed in my city! But you never know with them.. there might be another reunion in a few years. That'd be great.

There's no denying that Taylor Swift is a mega superstar. Her concerts sell out in the matter of seconds! During her latest tour, she had amazing opening acts and special guest performers. She sold out 66 out of 66 shows (no surprise). Her tour grossed $115,379,331 and brought out over 1.3 million people!

Of course Queen Bey was going to make this list. Her tour was one of the most talked about tours of 2013! She sold out 40 of her 59 shows and grossed a total of $104,358,899. Beyonce definitely knows how to put on a show. If you're ever in the crowd at a Beyonce concert, it pretty much changes your life. Trust me.

Don't underestimate the power of Country music. Kenny Chesney is one of the biggest names right now in the country world so it's no surprise that his tour did so well. He sold out 31 of his 44 shows and grossed a total of $90,932,957. Very impressive. I remember seeing him live with Tim McGraw and it was an incredible show!