Eminem and Rihanna Kill It in Detroit ... 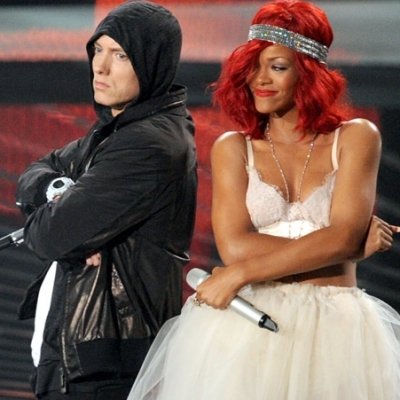 Fans of the incomparable Eminem and the diamond, the doll, Miss Rihanna, have likely been keeping up with the deets revolving around the short, exclusive Monster Tour. The tour only made stops in LA, NYC, and Em's hometown, Detroit. The Detroit shows at Comerica Park close out the tour – Eminem added a second date, so Detroit got to see their hometown boy on August 22 and August 23. It just so happens that yours truly and her own hometown honey hopped a plane and headed in for the first show.

For some people, this is just another tour, just another show, distinct only because it was absolutely epic. In the spirit of The Marshall Mathers LP 2, Shady was back with a vengeance, and there was a marvelous mix of classic spits, fan favorites, and new grooves. Highlights include not just the opening video montage, which ripped on Silence of the Lambs hilariously, but also performances of “Love the Way You Lie,” “3 a.m.,” “The Way I Am,” “Without Me,” “I'm Not Afraid,” and a beautiful performance of “Like Toy Soldiers." For the record, that speed-rapping riff in “Rap God”? That's totally legit – and kind of sexy to see. Rihanna, too, played many of her much-loved hits, while incorporating newer songs and providing a perfect foil for Eminem. You almost never want to see him duet with anyone else, and that comes from someone who can take or leave Rihanna. (However, it must be said that the girl puts on a remarkable show, has moves better than Jagger, and perhaps the best dancers I've ever seen.)

What really made these shows remarkable is Eminem's continuing determination to bring something back to Detroit. It's not news that the city has been going through tough times itself. Marshall's two concerts brought in 130,000 people, and he promises his city that more and more uplifting, positive, fun activities will follow. His fight for his city and its betterment isn't just a ploy. You can tell, too, that he's happy to be home, and to play to a crowd that loves him without reservation.

Middle fingers high if you're down, y'all.